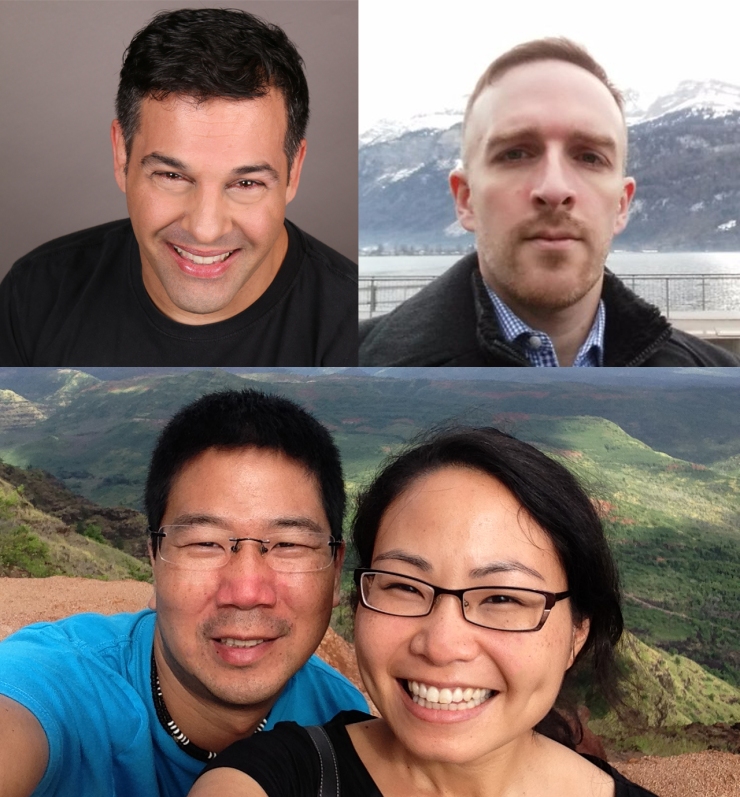 Andy grew up a gamer, and as an adult decided to pursue his love of games to become a game designer. Andy is focused on the intersection of play, education, and technology. Together with his wife, Casey, over the years they created a number of games intended to be fun and educational. Andy had the honor of meeting Joshua and Michael at the University of Southern California. Andy spends his time reflecting on his life as a gamer/Marine/designer/adult/husband to create experiences that can help others avoid the mistakes he has made in life. Adulting is hard, but it can also be humorous. 🙂

Since childhood, Casey has had an avid interest in games, growing up in a family of video and board gamers. With over 15 years of experience in the public health and healthcare industry, Casey is interested in the potential for games to improve health and well-being. Casey graduated from Brown University with a BA in Psychology and completed her Master of Public Health degree at the University of Washington. Aside from creating and playing games with her husband, Andy, Casey’s favorite things include volleyball, snowboarding, sea otters, natto, science fiction, and sun dogs.

Michael Annetta is a designer and producer working across all aspects of media. He has worked with, among others, Wemo Labs/WEVR (designer on the Proto Award-winning Samsung GearVR Launch title, theBluVR), MatterVR (lead experience designer on Wonders of the World), Walt Disney Imagineering, Flying Mollusk (VR Lead and Creative Producer, Nevermind), The Annenberg Innovation Lab, The Alchemists, and Mirada Studios. Michael is a former member of the steering committee of TransmediaLA (now StoryForwardLA). He has presented on games, transmedia, and virtual reality at PAX Prime, San Diego Comic-Con, Storyworld, NAMLE (National Association for Media Literacy Education), VR Long Beach, CalStateLA, and Bent-Con.

He holds an MFA from USC’s Interactive Media & Games division (where he was the first-ever recipient of the USC Lambda LGBT Alumni Association’s NOGLSTP (National Organization of Gay and Lesbian Scientists and Technical Professionals) Scholarship in Innovation). He currently teaches game design in the department as a part-time adjunct assistant professor.

Michael shifted into games and interactive media after a diverse career as a performer, singer, voiceover artist, director, and producer for stage and film. When prompted, he can (and will) still perform a Shakespearean monologue or 16 bars of a ballad and uptempo.

Joshua McVeigh-Schultz is a designer and researcher in the Bay Area. He is currently a postdoc in Katherine Isbister’s Social & Emotional Technology Lab (UCSC) and a research manager for the Institute for the Future. His latest research focuses on supporting pro-social interaction in social VR. He has published and presented research internationally and has worked with a range of industry partners including Microsoft Research, Intel Labs, Steelcase, BMW, and Cisco. He earned a PhD in Media Arts & Practice at USC. At USC he worked as a design researcher in Scott Fisher’s Mobile and Environmental Media Lab (MEML). He earned an MFA from UC Santa Cruz’s Digital Arts & New Media program and an MA in Asian Studies from UC Berkeley. He also holds a BA in anthropology from the University of Chicago. For his undergraduate thesis, he researched Vervet monkeys in the Serengeti.